I have heard many times in the past eight years about “their fair share.”  Fair share of what?  It was used by Democrats during the last couple of presidential elections.  It is an honest and fair mindset.  Why are people getting screwed and not getting their fair share of the American dream?  Why do the rich keep so much money?  That mindset and preaching preys on the weak-minded people who are down on their luck or just plain lazy.  Why do rich people keep so much money?  Because they usually do not just buy dumb shit.  They might make a lot of money, but they do not spend most of it.  There are the rich people who just waste it on stupid shit like insanely expensive cars and such, but the hard-working rich are lumped into the same group as the ultra-rich assholes that would light babies on fire for an extra “hundo.”

The real question should be, what about pulling their fair weight?  People assume that someone who works really hard and makes a lot of money has an obligation to just give money to lazy people who would rather sit on the couch and watch TV instead of working.  If I could have been paid to watch TV, I would have made a killing as a kid.  There is a simple fact here: you get out what you put in.  If you put in a bunch of time on something that does not matter, you will not get anything back that matters.  If you put time and energy into something that is worthwhile, you will get something worthwhile out of it.

If you have spent the last fifteen years working a minimum wage job and never finished school or tried to better yourself, do not come whining to me when I have spent that time getting a degree and working my ass off.  You have the same potential as anyone else that lives in this country.  When you pull your fair weight, you will get your fair share. 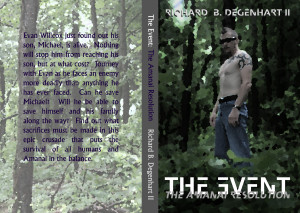 The cover for The Amanai Resolution has been completed!  As usual, Caitlin Taylor did an amazing job on the cover!  It sure beats the crayon drawing I had for the cover.

People are shortsighted.  It is easy to think that outlawing all guns will prevent mass shootings.  That thought completely ignores the fact that criminals and the mentally unstable do not give a shit about laws.  Economics tells us that when there is a shortage due to regulations, there will be a black market to satisfy the need (shortage).  Why do people “forget” that there is an illegal black market for buying illegal guns.  That is different than the private sale of guns (which it is still illegal to sell a firearm to someone with a criminal record who should not have one to begin with).

Laws already exist to prevent people from illegally getting guns.  The laws do not have the effect lawmakers expect.  The only people who do not give a shit about taking a gun into a federal building are the criminals who just plainly ignore the laws.  Believe it or not, my bank allows concealed handguns if the person has a permit.  Just because I walk into a bank with a gun does not mean I am going to rob it.  Just because the bank down the street does not allow concealed handguns does not mean the person going to rob it will just turn away because there is a sign.

Inmates are not allowed to have weapons.  Does that prevent them from obtaining them?  No!  Weed being illegal on a federal level does not mean people will stop smoking it.  Driving under the influence of alcohol and drugs is illegal.  That does not prevent people from doing it.  In fact, it may shock some people (note the sarcasm), but it is actually illegal to kill someone!  Yet, in this day and age, even though there are laws to prevent it, people still kill other people.  I know!  I’m shocked too!

The point is that every government in the world can outlaw guns, knives, impure thoughts, all drugs, all alcohol, and everything mean and evil, but evil will always exist.  There is not a damn thing we can do to prevent it.  There is nothing I can do to prevent a determined person from breaking into my house.  Is being nice to him going to stop him from hurting my family?  Probably not.  I can prevent the dumbass from hurting my family by killing him.  If I am going to fight someone in an attempt to keep my family safe, I would rather do it with a gun instead of with kind words, and since no one can prevent an intruder from breaking into my house with laws, they should leave me be to deal with the intruder in a way that will let me save four lives by taking one.

When catastrophe strikes, we try to think how to prevent it in the future.  The problem is, nothing can prevent tragedies.  It is a part of life that we have forgotten in a civilized world.

The first thing we try to do is explain why something like this happened.  Why did a wildfire take out thousands of acres and homes?  Why did someone shoot up school/office/church/restaurant?  Why did the ship sink?  Why did the plane crash?  Some of those answers are pretty easy to answer.  Some idiot started a camp fire during the dry season.  The person was mentally unstable.  The ship hit an iceberg.  The plane lost power due to faulty wiring.

Technology has become so good that we can cure many diseases and prevent a lot of deaths; however, we will all die at some point.  I do not like that fact any more than the next person, but we forget the realities.  Hundreds of years ago, old was forty.  Now, old is eighty.  We have forgotten how to embrace life and lost the knowledge that tragedy can happen at any time.  The only difference between then and now is that in 1565, the next city probably never heard about the “crazy” person that shot fifteen people with a bow for apparently no reason at all.

Sometimes I wonder if vacations are truly worth the effort and time.  There is nothing like pausing your life to have some fun.  I enjoy not thinking about every day life for a week.  Then when I get back, I am cursing the very vacation I was praising.  For example, I have over 500 emails at work that have not been looked at, and I have another week to go for this vacation.  We just got back from a week at Disney and the A/C compressor is hosed for the house.  After driving 16 hours straight (THANK YOU TRAFFIC!!!!), I have a fun day of taking apart the A/C compressor unit and trying to figure out what is wrong with it before paying someone $60 an hour to do it, mow grass, buy a bunch of groceries, do a couple suitcases full of laundry, and finishing unpacking and cleaning the car so that I can use this week of work vacation to actually work around the house to get everything back to livable conditions from the week away from the house.  Wow!  What a sentence!  At least the animals are still alive (thanks to the parents) and no one stole the Camaro.

I know I have stated many times that I have been very busy.  Some things are starting to calm down.  In a week, the cows will be taken to the butchers.  That is a good thing as the basement project, although finished, has put me in the hole a bit.  The Amanai Resolution is done and edited.  I have to admit that I feel a bit more calm as of late, but that could be the whiskey.  Either way, I feel relaxed and much better than I have in a long while.  That will probably all disappear in a few days, but I will take it while I can.